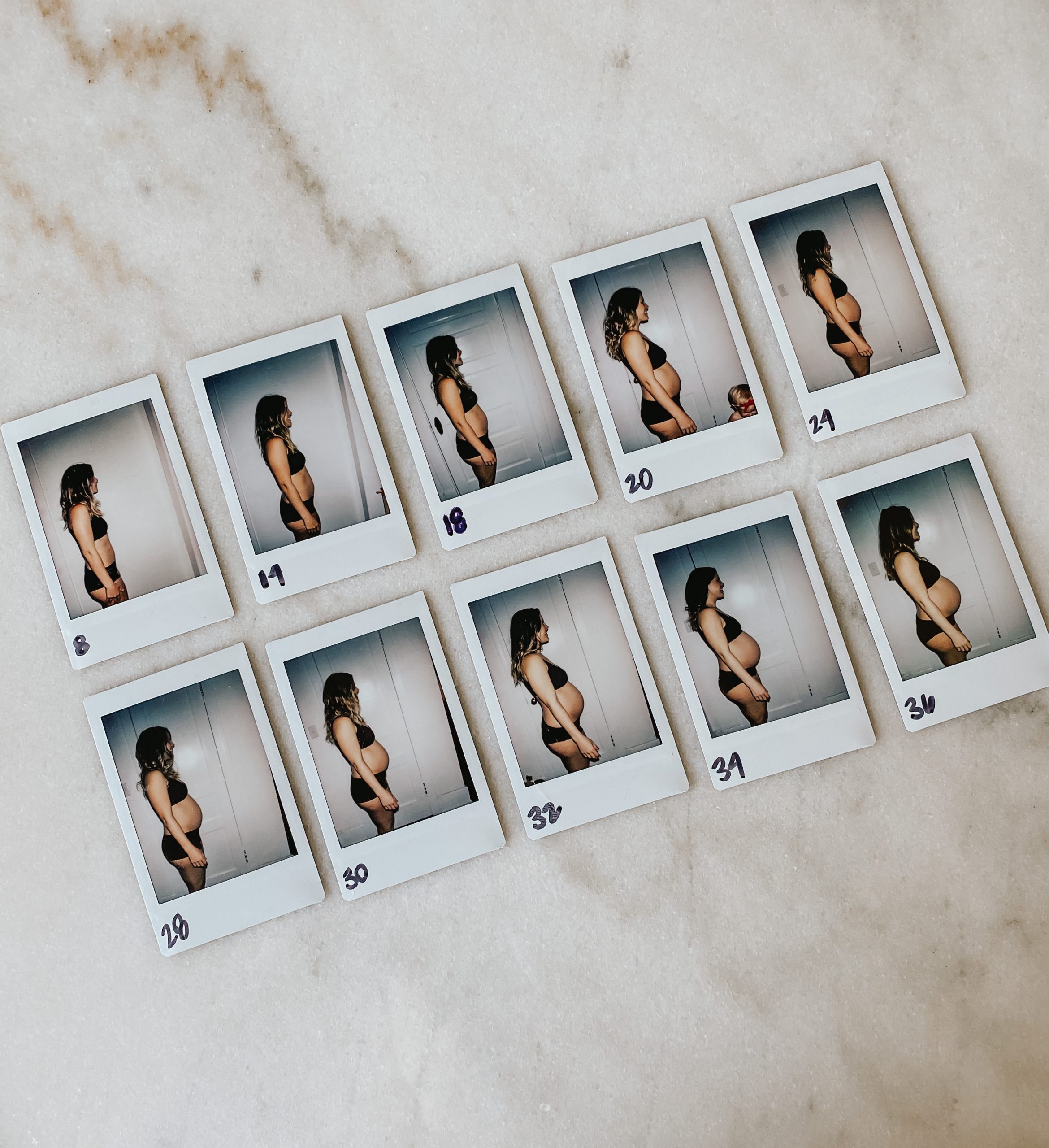 I announced my pregnancy back in August (when I was about 13 weeks along), but I  have yet to share any details or updates on my blog since! I’m now almost 38 weeks along, so we just have a few weeks left until baby girl arrives! I wanted to share a big brain dump of all things pregnancy, so I can remember this phase of life, and also in case anyone is curious or wants to learn about my go-to clothing, etc. this time around. i’ve organized everything by trimester with a little sneak at baby dancing in my belly at the end! at the end of the post, I’m sharing some of my favorite outfits and other pregnancy items that were helpful for me! overall feeling: SO TIRED. I had to nap when Lucy napped because by the afternoon, I  literally couldn’t keep my eyes open. some days I would feel a little nauseous, but never actually got sick. I also had some hormonal acne on my face and chest, which was my first inkling that this baby was a girl – since I  had the same with Lucy! in the first trimester, I  had waves of anxiety and worried a lot about the baby’s health. I’ve had a lot of friends miscarry (1/4 women do) and so that was very top-of-mind, especially early on. I think this time around I just KNEW more about loss, so was much more aware and sensitive and worried about it.

travel: so much travel early on in this pregnancy! I visited my bestie in Pittsburgh, had a work trip to Dallas, visited good friends in Chicago with E and Lucy, went to London with E, went on family vacation to 30A in Florida. it was A LOT of travel (everything pre-planned before finding out I  was pregnant) but also a nice distraction and made the first trimester go by quickly!

eating: food overall just didn’t sound good at all. I ate a pretty good amount of bagels and Saltine crackers and had absolutely no interest in anything that wasn’t a carb.

other: I immediately felt a wave of relief and comfort finally announcing I was pregnant, which I  did at 13 weeks. we had told close family/friends around 6 weeks.because I found out I  was pregnant, I  expedited finishing grad school, so July-August were spent doubling up on classes in order to graduate in December. super chaotic and stressful, but so glad I  did! Nashville is SO hot in the summer, so it was sort of miserable to be pregnant at that time but I’m SUPER glad I  was in first trimester vs. the third – ha!

overall feeling: good! the second trimester (for me) is that ‘sweet spot’ where you feel pretty good, look pretty good, etc. I  did have a three week stretch where I  had a cold/runny nose/cough that wouldn’t go away, which was annoying. thankfully, I’ve been able to sleep fairly comfortably during this pregnancy, too. It’s fun to finally be ‘showing’ a little bit more and of course, have more energy again!

travel: a work trip to LA, a long weekend celebrating friends in San Francisco, road trip to Ohio, and our two-week trip to Morocco and Portugal.

exercise: still exercising, but towards end was slowing down a lot and doing less cardio-heavy exercise and more low-impact exercises.

eating: food started to sound good again, but not as much as ‘normal’. I was eating more like my normal self, but typically in smaller portions as I  felt full a lot faster.

other: I started doing acupuncture (something I  did when pregnant with Lucy) which always makes me feel great! I was once again doubling up on classes to graduate in December, so was very busy work/school-wise, but found myself managing it a lot better this time around compared to earlier in the summer. overall feeling: early on in the third trimester I  was REALLY struggling. I had terrible low back sciatica pain and could barely walk. at my graduation, I  literally was hobbling across the stage. what seemed to ‘fix’ me was the chiropractor. ever since week 32, I’ve been going weekly and I seriously am a completely different person than early on in third trimester – thank goodness! I also have experienced some heartburn/acid reflux, which I never had with Lucy! it’s no fun, but definitely could be worse. other than that, I’ve noticed myself in that common ‘nesting’ phase where I want to clean/organize everything in our house. I’ve also caught myself more anxious at the end of pregnancy – not even about labor itself – but the timing of it and the logistics…who will watch Jack and Lucy? What happens if labor starts in middle of night? etc. I’ve been doing a lot of praying and meditating trying to LET GO of being in control and just trust that everything will be okay.

exercise: for weeks 28-31(ish) I was in so much pain I  could barely walk —  the only exercise I did was swimming. Now (at 37 weeks) I’m back to Pilates, swimming, Stairclimber and treadmill walks + weights. I’m also trying to go on daily walks with Jack just to keep moving.

eating: a lot of sour patch kids and chocolate covered pretzels. oops! I also basically only want to eat soup every day vs. actual non-liquid meals.

other: some friends spontaneously decided to visit for my birthday in early January and that was such a boost of energy for me! these last weeks can seem to drag along and be a waiting game, and it was so so nice to have some company which took my mind off all the baby things. my dad also came down last minute (around 37 weeks) while Eric was on a work trip and it was super helpful to have his help and company!

WHAT I’VE WORN THIS PREGNANCY

tops: asos button down top (maternity), everlane bodysuits (I have in striped and black, both long sleeve and wear with skirts/joggers/under jumpsuits), simple black maternity t-shirts and tanks from ASOS and Target,  Old Navy ‘Luxe’ tshirts and tanks — I have them in sleeveless, short sleeve and long sleeve and LOVE them. for the most part, I’ll wear a simple top or dress and layer it with a fun cardigan (like the fringe one pictured above!) or jacket.

bottoms: cozy pants, storq leggings (maternity), lululemon align leggings, asos black midi skirt (maternity), a few fitted non-maternity skirts from Target/Zara, and a few pairs of joggers. I have two pairs of maternity overalls and one pair of maternity jeans and just didn’t love them or feel comfortable wearing them this pregnancy.

other:
Maternity Belt – this was helpful when I  was having serious lower back pain!
Bio-Oil – I  didn’t get stretch marks with Lucy (although I  believe this isn’t from anything I did as it’s hereditary) but it always feels so nice to put this oil on my growing bump!

thanks for reading! xoxo