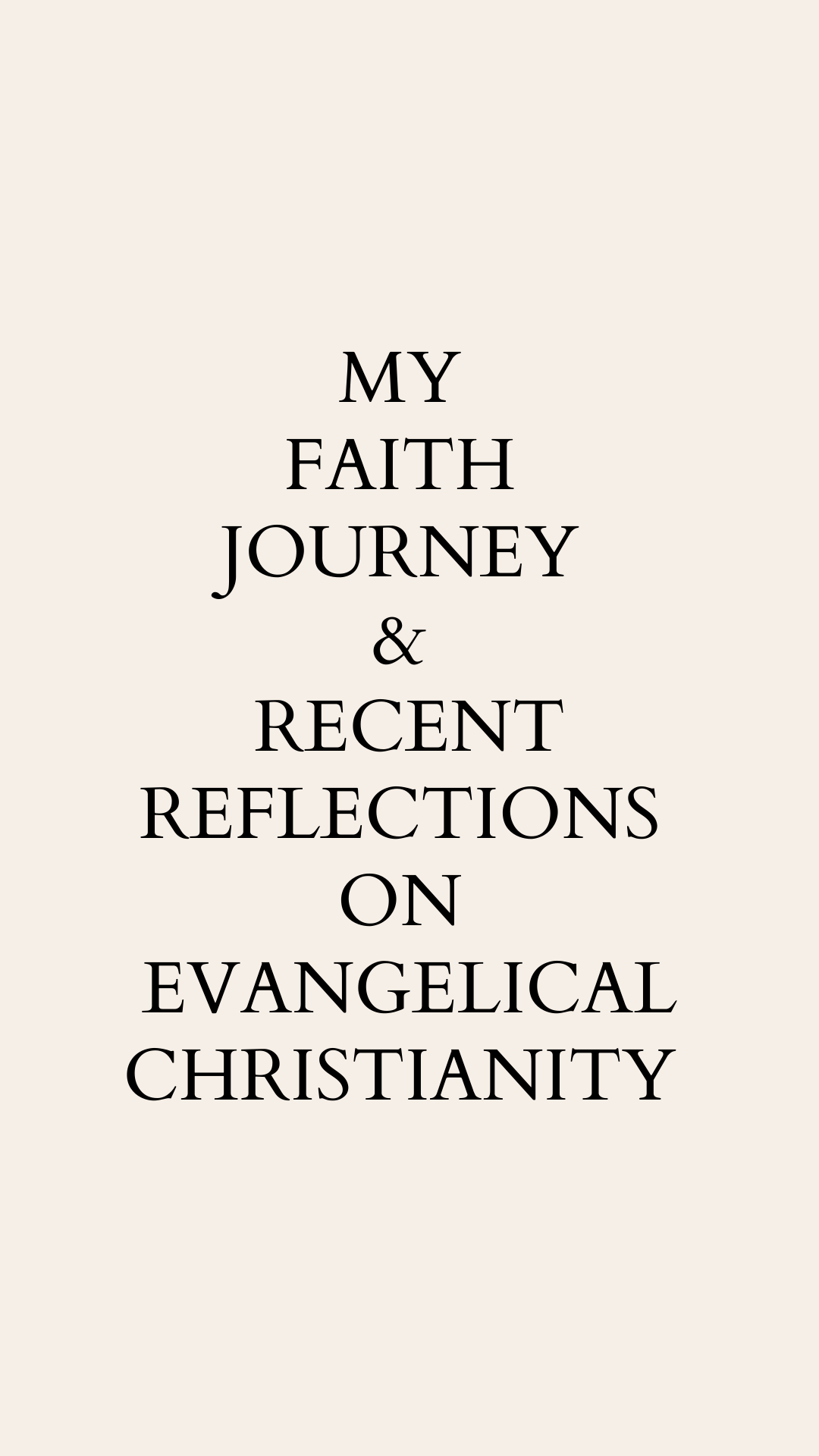 THE CHRISTIAN OUTSIDER: FEELING  “IN THE MIDDLE” & NEVER FITTING IN

I grew up going to church. My dad was Catholic at the time, and often worked on Sundays, so my mom took us four girls to church by herself. That was my first time experiencing feeling “othered” at church. Everyone else showed up with both parents and I just came with one. I  often felt ashamed that only one of my parents identified as Christan; somehow this made me feel “less than” or “not good enough” from an early age. That somehow my Christian experience wasn’t as good or true or deep because I  wasn’t like the other kids in my Sunday School class, simply because my dad was Catholic and worked on Sundays.

I went to a Catholic school growing up, even though I wasn’t Catholic. I always loved the rituals and traditions of the Catholic mass, and especially admired the beautiful church setting – the splendor of the stained glass and vaulted ceilings. I still find visiting Catholic churches and cathedrals a deeply sacred and special experience. But my time going to Catholic school as a non-Catholic was another religious experience where I felt like an outsider. All my classmates practiced and prepared for their First Communion in second grade, while one other fellow non-Catholic student and I sat in the pews and just watched. Of course this probably doesn’t seem like a big deal to an adult, but back in elementary school, it was a constant reminder that I didn’t fit in. In fourth or fifth grade there was a game show-type competition of who could memorize different Saints. Who they were, what they did, and were known for, etc. I was determined to know all of them and win, as if to prove, even though I wasn’t Catholic, I could at least know as much as I could about Catholicism as my classmates. I couldn’t change that I didn’t grow up Catholic, but I could work and perform and learn in an attempt to fit in.

We spent a lot of time growing up with my extended family of grandparents, aunts, and cousins. Their religious upbringing was much more conservative than ours; women and girls couldn’t wear pants and they couldn’t dance or go to the movie theater. Comparatively, the way my parents were raising us (which included private Catholic school and going to church twice per week) was “liberal.” I didn’t necessarily feel othered when it came to words or even action – but just the stark comparison between our ‘cultures.’ We were raised in a Christian home and did (what I thought was) “all the Christian things” like church on Sundays mornings and Wednesday nights, private school, Vacation Bible School, etc. but it felt like compared to this much more conservative Christian culture we were exposed to – it wasn’t ‘enough.’

When I  moved to San Francisco as a 22 year old, I  immediately looked for a church to meet other people. In San Francisco, going to church seemed to be the exception, not the norm. My close friends didn’t go to church or identify as Christians so I’d often go alone and try to meet people. The church I went to was fairly new and very hip, and I ended up attending, on and off, for many years. Everyone seemed to have that perfect “cute but not trying too hard” vibe and drank fancy coffee and went to cool shows and many of them worked at big tech companies and startups. I often felt like my outfits or my ‘vibe’ didn’t fit in at the church. And if I, a white woman — who grew up going to church, who was *also* wearing Madewell and worked in tech — didn’t feel like I  fit in at a church, how would my Black friend who works as a bartender feel? How would my gay friend feel when he came to a church service?

We moved to Nashville and there are churches literally on every other corner. It seems like almost everyone goes to church. Christianity is the norm. “Do you have a church home?” was something we were asked all the time, from people at the playground and the electrician doing work on our house. We went to a few churches here and there, but I honestly felt like I had one foot out the door. I couldn’t dive all in and drink the Christian Kool-Aid, because I had questions, reservations and doubt. So we stopped going, and then we would sometimes go back, and then we stopped entirely because of the pandemic and haven’t been back.

Most of my life, especially in my adulthood, I’ve felt like I’m “not Christian enough” compared to my friend’s who went to church and community groups every week, but “more religious” than my friends who didn’t believe in God or go to church.

I’ve been in this middle, gray area, “in it” but also not, for a long time.

I’ve always been spiritual and connected with words — whether through verses or lyrics or poems. I have been challenged and encouraged and inspired and comforted by the church and the Bible. I’ve had some incredible leaders and mentors in my life who I never would have met without my Christian upbringing and for that, I’m so grateful.

But also, I’ve seen the Bible twisted in ways to fit a certain narrative. I’ve seen certain verses or teachings be used as a “rulebook” or guideline for Christian faith, but other verses and teachings are ignored or placed with less importance.

But also, I’ve had some people who I  put on this “Christian pedestal” let me down, big time. Which has been an important reminder that people – all people, even those who are celebrated and praised for being a “good Christian” will let you down, and are not perfect. But when the Church or other Christians cover for others who did a lot of harm – that feels really icky to me.

It didn’t sit right with me that the church was a place that made my gay friends feel uncomfortable and not welcome. It didn’t sit right with me that churches I attended didn’t allow women to be in leadership; they could be guest speakers or children’s program coordinators but wouldn’t be given a seat at the same table as pastoral staff. It really has not sat well with me seeing more churches stay silent this year more than ever, when I believe, in the midst of a pandemic, racial tension, and a very heated political climate, they have an opportunity to take a stand.

And worse, other churches and Christan leaders not just staying silent but blatantly spinning Christanity to fit their own narrative. Things like putting Trump on a pedestal; making nationalism their god. Things like maskless “Christian worship gatherings” during a global pandemic that has killed hundreds of thousands of people in the U.S. alone. Things that blatantly feel the complete opposite of what the Jesus I learned about growing up talked about – defending the oppressed, standing up for women, feeding the hungry, helping the poor.

Just because someone says they are a Christian, does not mean what they are doing or how they are living is a reflection of God.

I don’t want to be in a community that “accepts” my LGBQTIA+ friends but doesn’t embrace, celebrate, and affirm them.

I guess right now I just don’t subscribe to the whitewashed, American, mainstream version of Christianity anymore. I don’t want to be a club that disregards scientists and doctors, who stays silent when people are oppressed and hurting, who “loves everyone” but really, only love those who look and believe the same things they do.

One church experience I participated in that I think of often is “Serve the City”, something a church I attended in SF hosted. There was no church that Sunday; instead we went to the Tenderloin, a not-so-great area of the city and served the homeless community. We played with children at a youth center, we cleaned out apartments, we provided food and clothes and haircuts, we gave people manicures and pedicures. It’s an experience I think of regularly, and it is something that feels so tangible and so Jesus-like. No fancy church gathering or hipster coffee, just meeting people where they are – loving them, serving them. Can there be more of this in the Christian community?

I do believe there are progressive — meaning countercultural to the “traditional” mainstream evangelical Christian churches — churches and communities that believe in God and are welcoming, affirming, and outspoken. Churches and people who back up what they believe not just with words, but with actions. I know there are progressive Christian leaders and authors; I just am early in my journey of finding who they are and learning from them.

Now, as a mother, I am wrestling with my own faith and thoughts on Christianity, while trying to determine how and what to teach my children. We don’t have the answers. We’ve asked our families to run all “Christian materials” like books, magazines, songs, movies, etc. through us before sharing with our children. We pray with our girls with a focus on thankfulness and gratitude. The few religious kids books we have focus on love, how we are all unique and special and made in God’s image, how every living thing has worth and value, that God cares for everyone.

For me, right now, my “issues” are less with my own faith itself but with the institution of American Christianity. With Christian leaders who refuse to call out white supremacy and racism, with social media influencers who have “abiding in Jesus” in their Instagram bios but are glaringly silent about social justice issues, about people who STILL TO THIS DAY put their “love of their country” (aka nationalism) over a love of the people who look and believe different than they do.

I believe in God. I haven’t lost my faith but I  guess I’m currently in a place of questioning, of deconstructing my faith. This is not a personal attack or critique on any one person, but instead some observations – and perhaps generalizations – I’ve made. I’m not interested in arguing or debating with anyone about this – this is my story and my experience. I believe that faith (or lack thereof) is a journey, and this is where I’m at currently in that journey. I  don’t have a fancy conclusion or ending to this. This is where I’m at in my religious journey. Thanks for listening.