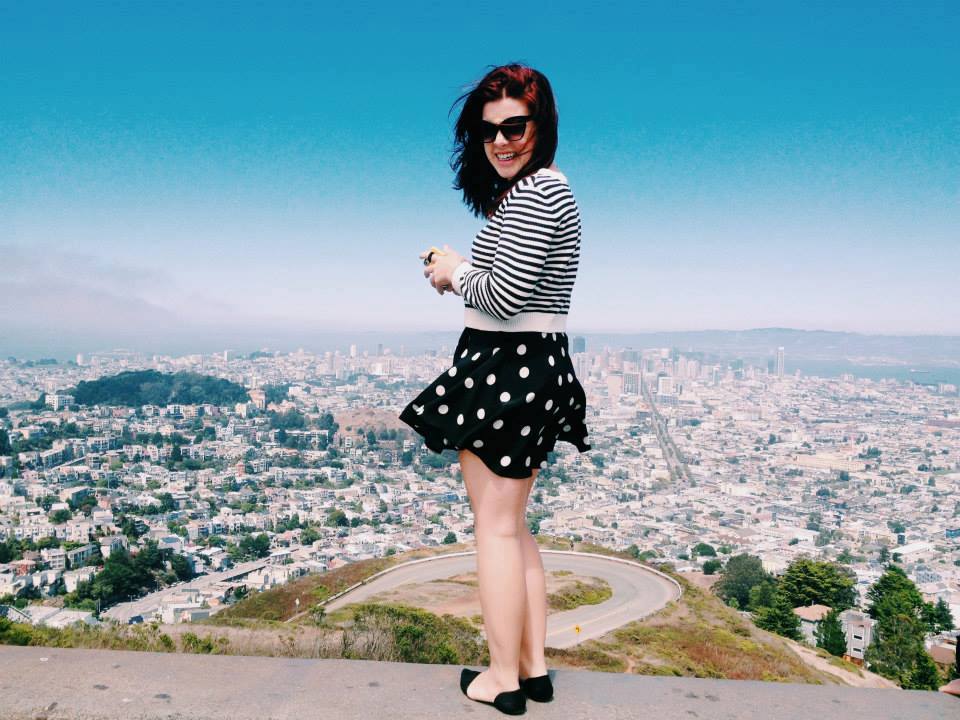 Eeep! We only have a couple days left in San Francisco and the past few weeks have felt like quite the whirlwind. While I’m excited to do something new, to live somewhere different, to have a new pace of life, it’s so so so hard to leave San Francisco. I’m going to try to capture it all in this blog post, but truly don’t think I have all the words for the jumble of emotions I have about this place. I also couldn’t even begin to choose photos to perfectly capture my time here (hello, hundreds of Instagram photos / Facebook albums and thousands of photos on my phone) so I just picked a few that have been my profile photos over the past almost 8 years.

I moved to San Francisco when I was 22 years old, right after graduating college. I didn’t know anyone, hadn’t been to SF or California or really anywhere west of Arkansas, and to be honest, I had zero expectations or plans. I told myself I would give it two years and re-evaluate. Before the move, I didn’t really do a whole lot of planning or researching. I wasn’t Googling all the SF things, or asking people on Instagram the coolest neighborhoods to live, or where to go. I’m really grateful that I moved here when I was young and fairly naive and that I possessed the “let’s see how this goes!” attitude.

A friend of mine I met (online only) through blogging, Rayne, offered to “take me in” and let me live with her and her husband north of the city for a few weeks. She picked up clueless, slightly terrified me from the Oakland airport and taught me the California ropes, explaining different SF neighborhoods to me, taking me wine tasting for first time, walking me through public transit, etc. She helped me move into my first apartment a few weeks later. Thank you, Rayne, for taking me under your wing and for cheering me on. San Francisco is where I started my career. I moved here for a job at Edelman Digital that set the course for my professional career thus far. I’m grateful for my first manager, Jenna, who has become a long-term friend and personal/professional mentor. She took a chance on hiring a random girl from Ohio based off a few phone interviews, and really helped me grow as a communications and creative professional. I met most of my “first SF friends” at Edelman, and we explored the city (almost all of us as transplants); many of them I’m still super close with. These are people who have helped me (so much!) professionally, who give me baby advice and makeup advice and workout advice and life advice, and are just good friends. I’m truly forever grateful that the job I moved here for has enabled so many amazing opportunities – personally and professionally. Since that job, I  worked at two startups and learned A LOT. I worked at Facebook for two years and now, I’ve had my own business, Lucky Collective, for about two and half years. I couldn’t have asked for a better city to spend the first 8 years of my career and work in fulfilling, interesting, and frankly, cool jobs that have helped me grow. San Francisco is where I cultivated my deepest and best friendships. A few months after I moved, some of my best friends from OU, Courtney and Aimee, moved to SF. The following year, another best friend, Ali, moved too. I was friends with all of them in college, but living in San Francisco together in our early 20s created a bond like no other. We explored, brunched, daydrank, OKCupid-ed, MUNIed, and wandered our way around the city. There are many big and monumental moments, and even more small, ordinary and everyday moments and memories here in San Francisco I have with them. Without them, my experience in SF wouldn’t be the same.  It may sound cheesy, but our time here really shifted us from “college friends” to sisters. I’m not going to let myself go down a rabbit hole of emotions about my friendship with these gals in this blog post, because it’s not bound solely by San Francisco or living in the same place. All of that being said, I am so glad that San Francisco was the backdrop and stomping ground of our time together. And, outside of these three friends, there are so many other people I’ve met in San Francisco — through work and blogging and baby + mom yoga and the dog park and random friend-of-a-friend connections — that have become great friends. Some of them are like family, like Rob, who went from being a random friend I met via Courtney to being one of my first roommates and one of my closest friends. Or like Christine, who went from being my “work friend” to someone who knows everything going on in my life, babysits Jack and Lucy, and tweets with my sisters.  The people I’ve met here are what I’ll miss most about the city. San Francisco is where I met “my person.” I met Eric when I was 24 at a music festival in the park. We went on what was pretty much a blind date a few weeks later, and immediately started dating. To me, he is quintessentially California — he grew up here and loves surfing, hiking, fishing, and doing all the other outdoorsy things. I really started exploring California more with E —  trips to Big Sur, Mendocino and up the coast, wine country, Yosemite, Southern California, and so on. All of these places in California (including tons here in SF) that we went together have so many special memories attached to them from our first few years as a couple. He proposed two years later on a beach in Big Sur (here’s the story). We turned our tiny 650(ish) square apartment smack dab in the middle of the SF in the Lower Haight into a home. We adopted Jack. We kept exploring – San Francisco, California, Vancouver, other parts of the U.S., Central America, Europe. I’m so grateful that our adventure started here in San Francisco and for the five years we’ve spent together here together. San Francisco is where I became a mother. In May 2017, in my teeny tiny bathroom, I took a pregnancy test and everything changed. There was a “before baby” and an “after baby” and I believe it started right then and there in the bathroom. I spent my pregnancy trekking around San Francisco, taking Jack to the dog parks, doing urban hikes with E and friends, meeting friends for coffee or lunch. During my pregnancy, I would drive past the hospital where I would deliver, and I would say a little prayer every time – just asking God to take care of my baby, and to watch over whatever was going to happen to us in that hospital when she was born. In January, little Lucy Grey made her grand debut (here’s her birth story)! She’s spent the first seven months of her life as a true San Francisco baby. She’s had lemon ricotta pancakes at Plow and bread from The Mill and rice and (cooked) salmon from our favorite sushi spot, Domo. She goes on frequent walks at the beach and swings at Alamo Square Park and has playdates in Dolores Park. A few weeks ago, my friend Rob said  “Lucy is so lucky that she gets to tell people she was born in San Francisco.” I couldn’t agree more. As a mom in SF, I’ve met so so so many amazing moms who have become a support system and “in it” (motherhood) with me. I don’t know if this exists in other places, but I’ve learned everything from these moms — the best stroller for travel, teething tips, how to babyproof, etc. I’m so grateful that SF is where we grew our little family. SF is the city where I became an adult and grew into who I am today. I moved here in 2011 with a couple of suitcases, not knowing anyone. I’m leaving with friends that have turned into family, a husband, a dog, a daughter, incredible professional experience, and millions of amazing memories. The city has stretched and grown me, and truly I feel like SF is part of my identity.  I’m so used to saying “I live in San Francisco!” and it feels so weird to think that I won’t get to do that anymore. I’m excited and hopeful about the move, but also really scared and overwhelmed. It’s so bittersweet to leave this place. I wouldn’t be who I am right now without the millions of moments and experiences that have shaped me over the last (almost) 8 years in San Francisco.

If you know me personally, I’ve probably told you this story, but as Rayne was driving me to her house after the airport, she said something and it’s stuck with me. She said “bravery and courage are always rewarded.” Little did I know how very true that would be. I made a brave choice to move to San Francisco almost eight years ago, alone and clueless about what was ahead, but the rewards have been so so so worth it and beyond what I could have ever imagined. Grateful for the city that I’ve had the opportunity to call home for the past 7.5 years.