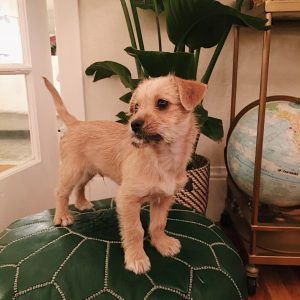 hi friends! say hello to our new puppy, jack! we’ve been wanting to rescue/adopt a dog for a few months now and it finally happened over the weekend. recently, we’ve been pretty much stalking rescue websites all over the bay area, applying/reaching out and not having too much luck. we ended up braving the rain and attending an adoption event on sunday afternoon that rocket dog rescue was hosting and met this sweet guy!

he had been in a loving foster home one week before the event, but before that, rocket dog rescue volunteers picked him up in the bakersfield area. apparently one of the volunteers saw a sign somewhere (like a grocery store or community bulletin board) that read “lost dog, will trade for iPhone” (??). the amazing volunteers reached out to the guy and rescuing the dog from there. we aren’t sure where little jack was before that, but we’re v happy he’s here with us! i’m so amazed by the work that rocket dog rescue does to save and re-home these pups. their team/volunteers have been super responsive and helpful even these last few days answering questions about shots, crate training, etc. their adoption fee/donation also includes the cost of the dog’s neuter/spay appointment and all up-to-date shots. thank you rocket dog rescue! fun fact: he was previously named squirrel, which is mostly funny because i’m absolutely terrified of squirrels. we decided that jack was better suited for him instead!

he’s been super energetic and playful and at the same time, cuddly and sweet. we know he’s a terrier mix, and our guess is something closer to a border terrier mix based on his coloring and markings and personality traits he’s exhibited so far. we’re still working on crate and potty training (??) but so far it’s been a pretty good transition welcoming jack into our home and making sure he feels comfortable. once he has all of his shots, we’ll be bringing him on a bunch of adventures! until then, SF friends, you guys should come meet him at our apartment. ? and we’re already planning jack’s big trip(s) to ohio when he’s a little older to meet his puppy cousin scout and our other family dog, rugby.

now…time to buy a puppy raincoat! 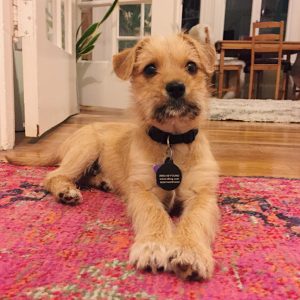 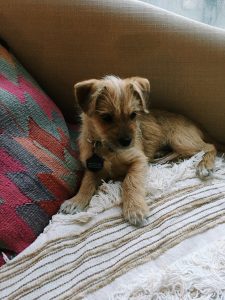 One thought on “Meet Jack!”