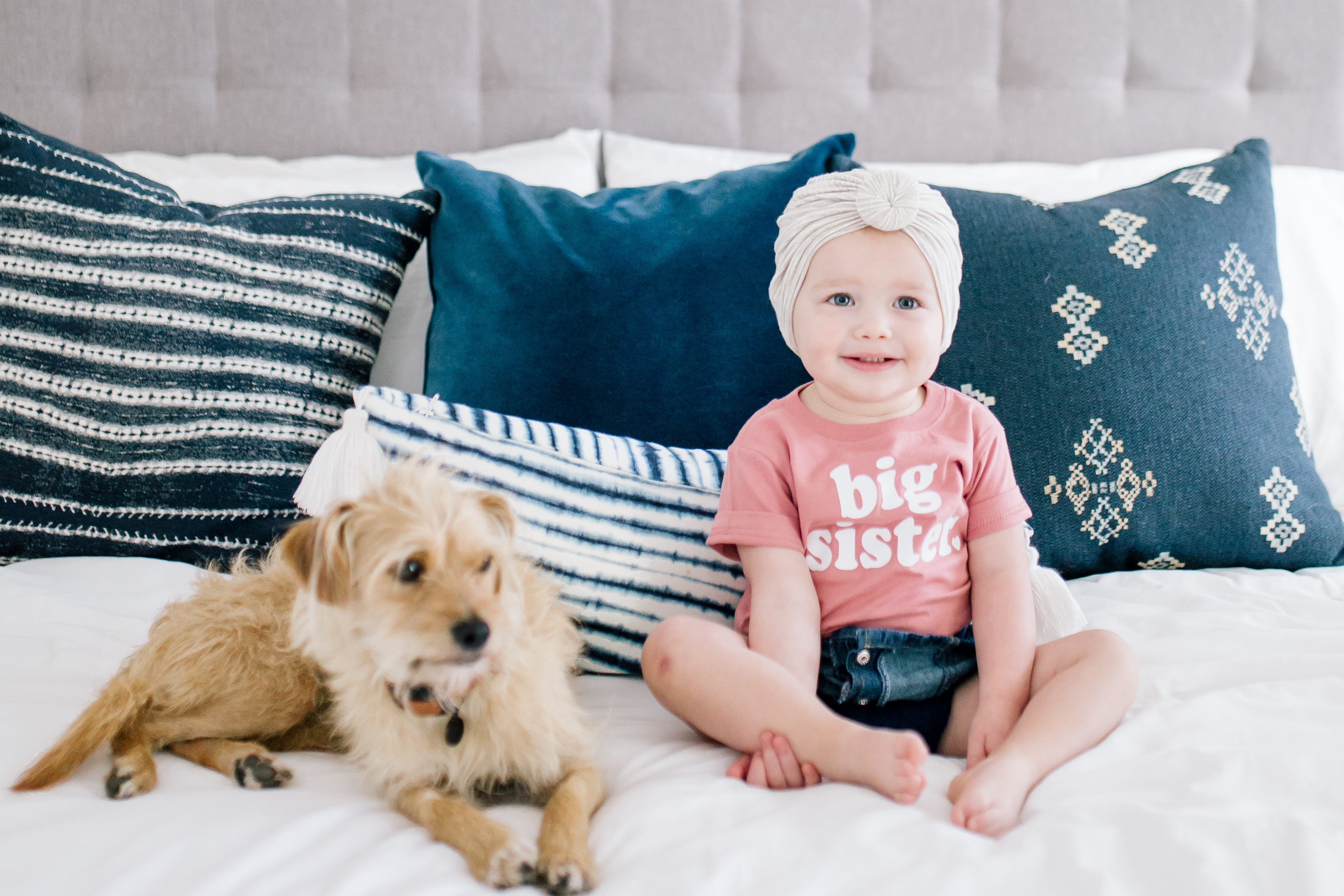 It was right around this time two years ago that I was sharing a similar update….but you heard it right, we are having baby #2! Lucy is going to be a big sister! I’m so excited to finally share our news publicly because I am TERRIBLE at keeping secrets. Our little babe is due mid-February, so Lucy will be two years and a couple weeks older than this little guy or girl. I’m a little overwhelmed by the thought of having two kids (plus a dog who thinks he’s a human) but mostly SUPER excited and so grateful. 💛 Obviously, this isn’t my first rodeo with the whole finding out I’m pregnant thing, but I was surprised just how intuitive I was about this pregnancy! One weekend, my period was a day or so late, and I felt beyond exhausted like to the point of OMG I CANT DO ANYTHING UNTIL I NAP and I just had a feeling. I took a pregnancy test a couple days later and it showed – positive! Two weeks later, I went to the doctor who confirmed yes, there was a teeny tiny baby in there. At that point, I was about 6 weeks pregnant. We saw the doctor around 9/10 weeks and already saw the baby moving, which was CRAZY! We saw his/her little arms and legs flailing – does that mean this kid will be as wild and squirmy as Lucy?!  🤪

I’m now 13 weeks, and feeling a whole lot better than I was earlier on in the pregnancy! My extreme fatigue has definitely faded, and thankfully, I’m less nauseous than I was early on. There were a couple of weeks when I could only eat crackers and carbs. 🥐🥯🍞🥨so it’s nice to start having vegetables again! It’s definitely true that you tend to show sooner with the second child, too! With Lucy, I didn’t really look pregnant until ~20 weeks. With baby #2, my belly is definitely looking…bigger! 😅My body is sort of at that awkward is-she-pregnant-or-did-she-just-eat-a lot phase (the answer is both) but it definitely seems to be showing a whole lot faster than my first time!

I’ve had this blog for so long now and have shared all sorts of life changes – graduating college, moving across the country to SF, getting engaged and then married, adopting Jack, having Lucy, moving to Nashville, and now, having a new baby! It’s really special for me to have my own little corner of the Internet to share and look back on. 💕Like I did with Lucy, I will share some updates on here, both related to the pregnancy and any other things I learn along the way. There’s a few of my favorite baby/kid/pregnancy related posts linked below.

Thanks to everyone I’ve awkwardly told up until this point who has been loving, encouraging and supportive of our family! And everyone else, thanks as always for following along and being so kind to me. ✨ How to Support New Parents

Tips for Traveling with Babies and Toddlers